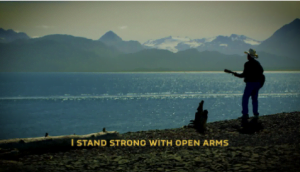 Well the cat’s out of the bag so I had better write something.

The last couple of days of the Alaska State Fair I was experiencing some things that didn’t seem right…mostly intense pain. I then went to play Wyoming for a night and things took a turn for the worse.

When I got back to Nashville I went to the E.R. and was immediately hospitalized.  After 3 days of pricks, pokes and probes I was diagnosed with end-stage cancer. The cancer (which I didn’t know I had) had spread through my system and had several very, large tumors.

The bottom line is that it is untreatable by chemo/ radiation or surgery.  I have been given a short 3 to 6 months to live. Probably more than many get.

Now, with that out of the way, I would like to say I am not afraid. I have never feared death as I am good with my Lord. It is however, VERY hard to feel the pain of those I leave behind. Especially that of my beautiful wife of 42 years. This coming on almost immediately after this springs loss of our only child and the tragic death of my beloved daughter-in-law. I love life but 2021 can go away now…I have had enough.

I have had a very blessed life until recently. I have been able to make a living making people happy, I have been able to live in a State that is the crown of God’s creation, I have seen a great deal of the world and all and all…life has been grand and fulfilling. Keep me in your hearts Alaska as you will be forever in mine.

We’re so excited to announce that the famous, Hobo Jim dinner show is back at AJ’s OldTown Steakhouse & Tavern. Hobo Jim is known as “Alaska’s State Balladeer”, meaning he’s the Last Frontier’s most well-known singer. His ballads crossover from music to culture, as his famous Iditarod Trail song is part of the curriculum in the Alaska school system and has inspired many of today's mushers into following that great sport. Want to hear this local legend play for yourself? Read on for more details on this year’s Hobo Jim dinner show series!

Due to the show’s popularity, reservations are welcomed and recommended. Reserve your table at AJ’s OldTown Steakhouse and Tavern during one of Hobo Jim’s dinner shows!

Everything You Need to Know About the Hobo Jim Dinner Show

Who Is Hobo Jim?

Jim Varsos, a Wisconsin native best known as Hobo Jim, is an Alaskan legend. His powerful performances across the state had such an impact that in 1992, the Governor of Alaska and the legislature of Alaska honored Hobo Jim by naming him "Alaska's State Balladeer."

Legendary arctic explorer and dog musher, Colonel Norman Vaughan, once wrote..." the words Hobo Jim and Alaska personify one another, he is the greatest musical treasure we have in Alaska.”

Where Is AJ’s OldTown Steakhouse & Tavern?

There is no place in the world like Alaska, and there is no other performer in the world like Alaska's Hobo Jim. That said, we’re honored and excited to have Hobo Jim’s dinner shows back at our favorite restaurant in Homer, AJ’s OldTown Steakhouse & Tavern! Located in the heart of Old Town Homer, this casual fine-dining establishment serves prime steaks, fresh seafood, and craft cocktails. Even better, it’s also the venue for Hobo Jim’s famous dinner shows!

Due to limited seating, the cover charge will be $10 per adult and $5 per child. Reservations are always recommended!

Stay at the Driftwood Inn

Want to see one of Hobo Jim’s dinner shows when you visit Homer? Stay near Old Town Homer at the Driftwood Inn! When you stay with us, you’ll have easy access to all the best Homer, Alaska, attractions – Hobo Jim’s dinner show is just the beginning! Fishing charters, bear viewing tours, and hiking excursions are among some of our favorite things to do in the summer.

Check our availability to start planning your trip to Homer, Alaska!